Jewish Jubilee: Traditions and Customs For Classic and Contemporary Couples

Jan 30, 2017 01:51 PM Back
Weddings for the Jewish community have always been steeped in deep biblical tradition and have extremely significant meaningâ¦even for modern day Jews.

Typically a traditional Jewish ceremony takes place in two phases: Kiddushin (also referred to as erusin) meaning betrothal and consisting of the couplesâ sanctification and dedication (to each other); and nissuin (the actual marriage) at which point the couple officially become husband and wife and start their life (as such) together.

The Kiddushin, officially announces the couplesâ intent and makes the bride- to-be off limits to all other men, to the degree that it would require a religious divorce and the nussuin unites the couple as one and is the final phase of the solemn ceremonyâ¦and takes place under the chuppah (the wedding canopy).

Contemporary couples complete the erusin during the exchange of wedding ringsâ¦or when the groom presents the bride with âsome otherâ noted or valuable token denoting their bond and thus sealing the deal.

Also, while historically the chuppah, where the couple stands together under the wedding canopyâ¦and the yichud, the part of the ceremony where the two were left in a room alone together were conducted separately, today they are conducted simultaneous and are often âone and the sameâ.
Â
Signed, Sealed and Delivered: Prior to the wedding ceremony, the groom or chatan Â consents to signing the Jewish marriage contract (ketubah)in the presence of two witnesses. This traditional Jewish wedding contract (which is a legally binding agreement) specifically outlines a husbandâs (basic) duties to his new wife including providing her with: food, clothing and marital affections. Furthermore it is typically framed and proudly displayed in their home. According to tradition the contents of this contract are read aloud in traditional Aramaic (or in translation for todayâs bride and groom0 under the ketubahâ¦.and symbolically shows the two distinct parts of the wedding.

Under Cover Ceremony: The chuppah, (or traditional wedding canopy), is where the official wedding ceremony takes place. It is symbolic of the new home being built as they unite as husband and wife.

Taking Cover:Â  Covering a brideâs face with a veil is especially typical of Ashkinazi tradition. The bride is then âprayed overâ usually with words spoken by Rebecca in Genesis 24:60. This veiling tradition is customarily referred to as bedekenâ¦with the veil serving as a reminder of how Jacob was duped by Jacob into marrying Leah before Rachelâ¦.however, Sephardic Jews do not make this tradition a practice.

The Family Factor: Jewish tradition suggests that the groom is walked to the chuppahÂ  by the two fathers and the bride respectively by the two mothers. The parents known in Yiddish as untifirers means the ones to lead under.

The Circle Of Love: The bride encircles her groom three or seven times when she arrives at the chuppah. It is believed this tradition is derived from Jeremiah 31:22 where it is stated that: â a woman shall surround a manâ. Circling her groom three times is said to be symbolic of the three virtues of marriage: righteousness, kindness and loving kindness. Circling her groom seven times is a concept taken directly from the bible denoting perfection or completeness. Again, SephardicÂ  Jews do not engage in this practice.

Sealing The Deal: The official betrothal seals the deal usually with the groom presenting his bride with a ring. In traditional ceremonies two blessings are recited before the betrothal: The first is the blessing over wine followed by the betrothal blessing as outlined in the Talmud.Â  Once the blessings are completed the couple is offered the wine to taste.

Next the groom gives his bride a plain band of gold and recites the following: âBehold you areÂ  consecrated to me with this ring according to the law of Moses and Israelâ The groom then places the band on the brideâs right index finger with two witnesses (which MUST be present).

In more contemporary marriages the bride also gives her betrothed a band of gold, frequently quoting from Song of Songs: "Ani l'dodi, ve dodi li" (I am my beloved's and my beloved is mine), which is typically inscribed in the rings as well.Â  This modern custom is often conducted outside the chuppah so as not to confuse it with traditional wedding customs as it conflicts with traditional Jewish law.

Blessing The Union: The Sheva Brachot or seven blessings are offered by the rabbi or hazzan or by select guests which go up one by one for this extremely distinct honor. Once the blessings have been recited, the groom is offered some wine to drink. The bride is also offered a sip of wine. Frequently the wine offering to the groom is made by his new father-in-law and to the bride by her new mother-in-law. Songs are also sung during this part of the ceremony.

The Groom âCrushesâ It: Once the ceremony is finalized and the bride given her ring, the groom stomps on a glass shattering it (with his right foot) while guests cheer âMazol Tovâ (Congratulations). More modern couples may replace the glass with a light bulb.

Alone At Last: Â Yichud (the Hebrew term for togetherness or seclusion) is an Ashkenazi tradition that gives the bride and groom some together time and some spaceâ¦leaving them alone for 10-20 minutes after the ceremony as a means to complete the chuppah ceremony. Sephardic Jews however see this custom as compromising the coupleâs modesty and so it is NOT custom for them.

In Yemenâ¦this practice was intended to give the couple enough time to consummate the wedding as is found in the writings of Isaac ben Aba Mari (c. Â 1122- c. 1193)

Party On: Celebrating the union is extremely importantâ¦and that means plenty of partyingâ¦.and pleny of dancing. A significant tradition is for guests to dance in front of the new couple as a way to entertain them. Some traditional and âpopularâ Ashkenazi wedding tunes include: By The Grace Of God:Â  Following the meal, Birkat Hamazan, also known as grace after meals is delivered by the rabbi . Next a blessing over the wine is recited and two glasses of wine are poured into a third glass symbolizing the new and blessed union.
Â
Â
Â
Â
Â
Â
Â
Â
Â
Â 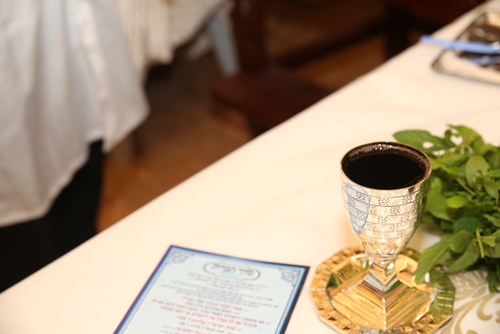