Dreams You Hold and The Band Of Gold: The Tradition Of The Wedding Ring

Mar 27, 2017 11:53 AM Back
The quintessential âband of goldââ¦even songs have been written about it, but where did this tradition come from.

Weâve got the answer.
Â
Banding Together: The first weddings bands can be credited to the Egyptians. It is noted that the pharaohs were among the first to wear a golden circle as a symbol of marriage. This shape was supposedly chosen because it has no beginning and no end and symbolically represents eternity and eternal love. However, ironically, the wedding ring gained popularity during the Roman reign, with the earliest designs crafted from simple iron with more âmodernâ designs embellished with stones and gems being the choice of band by Medieval times. In fact, gems had very special and specific meanings. The red ruby was symbolic of the heart; blue sapphires was a reflection of the heavens and diamonds (even back then) were forever and symbolized an indestructible union.

The Male Band: While rings were typically âfor ladies onlyâ, showing they were âtakenâ and âoff the marketâ, the Greeks made rings for both ladies and gents mainstream. Dual ring ceremonies were introduced as part of the prolific wedding ceremony during the 1300s. However, this âcustomaryâ tradition did not become âtrendyâ until WWII, when young men were forced to leave their wives and beloved ladies behind not knowing when or if theyâd return. These bands of gold were seen as the bond that kept couples together and gave each of them peace of mind while apart and serving as a reminder of their commitment as well as igniting their longing for each other and their anticipation for seeing each other. And, while no longer part of a war effort, the tradition was so well received that it continues until today.
Â 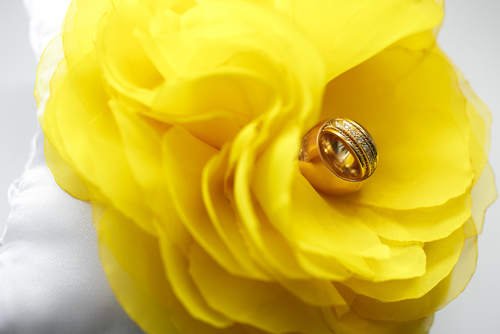