Feb 06, 2017 11:38 AM Back
The Middle Eastâ¦.It is currently a hot bed of discussion but itâs also an area that had some pretty âhotâ Â and sultry wedding customs and traditions.

But The Middle East spans a vast variety of countries each with their own unique flavor of festive MUSTS.
Here are some of the most posh and popular practices:

Jordanian Jubilee: Jordan is an area in The Middle East that, when it comes to wedding celebrations seems to espouse Texas values. In fact, when it comes to weddings, their motto might as well be: âGo Big or Go Homeâ. In Jordan, these LAVISH parties last an entire week beginning with intimate gatherings of close friends and family, with gatherings growing in size as the week progresses and culminating with a GRAND gatheringâ¦the wedding GALA, which is truly an majestic extravaganza. As per Jordanian tradition, as more and more guests are invited to each of the parties the more food is served. The night preceding the official celebration, the bridesâ hands and feet are ornately decorated with henna. This ritual is conducted by the women in the brideâs family as they sing and exchange stories. The morning OFâ¦the groom is traditionally escorted to a bathhouse by his closest friends and family members for a âspa-likeâ cleansing and grooming that includes lots of revelry such as singing, laughing, and telling jokes. Once the bride and groom (to-be) have been prepped for the formalitiesâ¦they make their way to the home of the groomâs parents. The bride is typically proceeded by a procession of cars honking after her. Once at the (groomâs parents) homeâ¦the men usually gather outside while the women congregate indoors. And, it is common for the festivities to begin with lots of singing and dancing to be enjoyed by all. And, for the noon mealâ¦Mansif ( a traditional Levantine delicacy made of lamb and prepared in a fermented dried yogurt, served with rice or bulgar), is customarily on the menu.

Egyptian Eclat: Egyptian marriages are binding contracts that are signed, sealed and delivered by a maazon, a man who has the authority to officially issue such a license and register it properly. This essential aspect of every Egyptian weddings takes place in the presence of the couples friends and family and is usually conducted at the brideâs house or at a mosque.

Lebanese Elegance: Â In Lebanon weddings are both sacred and truly eclectic CELEBRATIONS. A traditional Lebanese wedding is known as a âzaffeâ and is a lavish soiree that starts with friends and family and depending on the extend of the wedding, can consist of performers and dancers who are not only part of the exotic entertainment but who help escort the groom to is bride as the shower them with flowers and blessings. As far as the Lebanese are concerned, a proper party is all about the fanfare and the fun with an emphasis on CELEBRATION, dancing and making merry.

Distinctive Weddings of Dubai: In Dubaiâ¦itâs all about the âformalitiesââ¦starting with the formalwear for the bride and groom. Grooms in Dubai are adorned in white full-length shirt dresses known as a khandura or dishdasha worn in conjunction with a red or white checkered headdress, known as a gutra.

Ladies are fashioned in âfashionableâ long black robes (known as an abaya) which conceal their normal clothes. And, it is customary for them to also wear a headscarf while in public.

Iraqi âI Dosâ: In Iraq the nichan is THE celebration for wedded couples. At this joyous event the groom and his family shower the bride with lavish gifts including jewelry, diamonds and gold.
Â
Â
Â 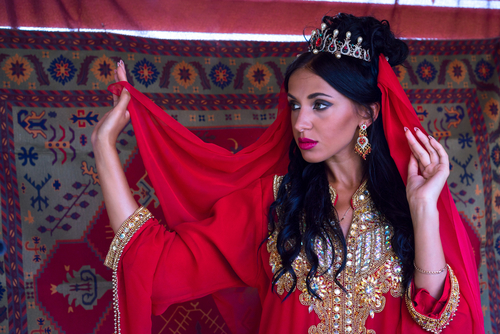