Behind The Scenes: The âTRADITIONâ Of Getting Married

Feb 22, 2017 05:49 PM Back
Besides our own culture and customs passed down from generation to generation, we all follow standard protocol when it comes to the pomp and circumstance of our nuptials. And, when it comes to these rich wedding traditions, they have quite a rich and interesting history.

1.Â  The Bell Of The Ball Gown: Soon-to-be-brides of days gone by usually wore the nicest thing in their closet to tie the knotâ¦and NOT a grandiose, glamorous gownâ¦.and believe it or not it, did not have to be white. In fact, often times the bride adorned herself in frocks of fur, silk and velvet to convince her groom that she came from a family of stature, which would make her more attractive to her groom to be. So, where did the grand white gown come from? You can thank Queen Victoria (who reigned from 1837-1901) who wed Prince Albert (in 1840) wearing a pale gown trimmed with orange blossoms for HER big day. Because it was fashionable, much like today, to emulate the Queen, this style became the ânew normâ and has remained the standard ever since.

2. Giving His âBaby Girlâ Away: Forget the sentimentality of todayâs dad walking his âfavorite ladyâ down the aisle and reluctantly handing her over to her groom. This tradition was not quite so âromanticâ. In fact, it came about because girls were considered âpropertyâÂ  and as potential âcurrencyââ¦and dad was merely making a peace offering or paying off a debt by offering his daughter as a bride. This bride price was typically made to a tribe or family that had âmore to offerâ. It was THE way to ensure the family âmoved up in the worldââ¦.and could be equated with dad buying his way up the âcorporateâ or social ladder.

3. Bridesmaids and Groomsmen: The best man was the original version of the ultimate âwing manâ. He historically stood by the groomâs side (because many ancients such as Goths, Visigoths and Huns) took their brides by force) to help him fight off disapproving parents. As for bridesmaids, they were intended to dress similarly to the bride and serveÂ  as âdistractionsâ from evil spirits and jealous ex-lovers that would interfere from the bride taking her vows and tying the knot. The same holds true for the formal tuxedo, intended to save the groom from the same fate. The Maid of Honor also had the distinct duty of hand-crafting all the wedding dÃ©cor and decorating for the wedding all by herselfâ¦.making her the original âDay Of Coordinatorâ.

4. Traditional Wedding Day Tosses: Tossing out your garter belt and the bridal bouquet have some seriously âoff-colorâ origins. Brides and grooms were expected to âmake the marriage officialâ immediately after the âI Dosââ¦and with plenty of witnesses in full view. Ladies would claw at the brideâs gown as it was being torn from her body hoping for some luck (in the romance department). However, time changed this tradition and what transpired was todayâs âtranslationâ of tossing the garter and the bouquet. By the wayâ¦brides of days the past carried bundles of herbs (now replaced by the bouquet) to ward off evil spirits.

5. Sentimental Sayings: Weâre all familiar with âSomething Old, Something New, Something Borrowed, Something Blueâ¦(And A Sixpence In My Shoe)â. Again, this tradition stems from ancient superstitionâ¦and this particular saying stems back to the Victorian age and each âritualâ was intended to bring the bride good fortune. Something old referred to the brideâs attachment to her family and her past while the something newÂ  referred Â to her new life as a wife and as the property of a new family. The something borrowed was typically something from someone already successfully wed (to bring good luck to the new couple)â¦and the something blue was symbolic of the Virgin Mary and represented faithfulness, purity and loyalty. As for the sixpence, it was representative of prosperity and wealth for the newlyweds.

6. Sweet Nothings: So, why do we have a cake cutting âceremonyâ? Better yet, why do couples try to smash cake in each otherâs face? This is simply the evolution of a tradition from days of yore. The groom would take a bite of barley bread (for himself) then crumble the rest over the brideâs head showing his male dominance. Guests would then make a bee line for wayward crumbs as they were supposed to bring good luck. As the tradition evolved, cakes replaced barley bread and instead of it being broken over the brideâs head, this sweet confection was cut at the table and then the bride would hand out small morsels (that had been blessed) to waiting guests through her wedding ring. This further evolved into slices of cake being handed out to guests, not for consumption but for placing under their pillow for good luck, and for ladies, as a means of eliciting sweet dreams of a future mate.

7. Save-The-Cake: The tradition of freezing the top layer of our wedding cake and eating it on our anniversary a year later may seem silly, and not very tempting (if you consider freezer burn).. but itâs origins stem from a popular childrenâs rhyme âFirst comes love, then comes marriage, then comes baby in a baby carriageâ. Back in the day, it was presumed that children naturally followed the wedding night and the honeymoonâ¦and with people being more practical and frugal, it was a way of saving money on cake. Instead, they would freeze the leftovers to be consumed for the joyous celebration of their little oneâs arrival and/or his or her Christening. Eventually, the notion of another cake became popular but couples still maintained the custom of saving part of their cake for enjoying on their first anniversary. 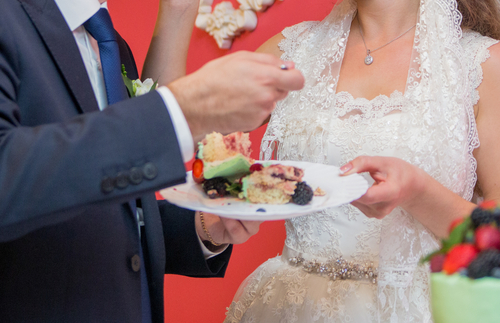