South Of The Border: Trendy and Traditional South Asian Weddings

Aug 08, 2017 09:42 AM Back
Traditional Indian affairs are truly affairs to remember as most are multi-day soirees steeped in intricate details and customary celebrations.
Indian weddings consist of three very distinct parts: Pre-wedding,Â  The MAIN event, and post wedding celebrations.
Pre-wedding festivities are in some sense âsimilarâ to what we in North America are accustomed to and consist of a host of preparations and a party, where families can mix, mingle and meet before the big day, getting to know each other, eat, drink and make merry.

A Pandit (a Hindu scholar well versed in Sanskrit and Hindu philosophy and religion) is responsible for picking out the wedding date based on the couplesâ respective horoscopes and conducts a special Â wedding prayer with the family members in an effort to bless the union and provide theÂ  couple with a long and happy married life.

A wedding altar known as a mandapa is build on the day of the wedding and here the groom is welcomed by his future mother in law to have his feet washed and where he is fed with milk and honey. HereÂ  also the groomâs soon to be sister in law will make an attempt to âstealâ his shoes and should she be successful, he will have toÂ  pay her to have them returned. The groom is also traditionally expected to wear a turban adorned with a veil of flowers in an effort to guard him from evil spirits.

Both parents (not just one) traditionally give an Indian bride away (to her groom)â¦however, no food or drink are consumed prior to the ceremony so that all parties will remain pure for such a solemn occasion. The brideâs saree is tied to the groomâs scarf as a symbol of two souls coming together as one. Another similar ceremony calls for a cord to be tied around the coupleâs neck by elders known to the bride and groom as a way of protecting them from evil spirits.

The Mendi, or the painting of (ladiesâ) hands and feet, known as the mehndi, is also an integral part of the wedding preparations. Guests of honor are given and adorned with garlands in lieu of corsages and rose petals are thrown for good luck.

The Magna Sutra (a Hindu necklace) is tied around the brideâs neck in lieu of exchanging wedding rings. The Magna Sutra is a cord with two gold pendants that is tied in three knots signifying the unification of the two souls for 100 years. Plus, it denotes that the bride is married.
The Mangal Pheras is a fun ceremony calls for the bride and groom to circle theÂ  sacred fire four times (representing dharma, artha, kama and moksha) then running back to their seats. Whoever makes it back to their seat first is said to be the ruler of the household.

The Saptapadi is a tradition in which the groom assists the bride in touching seven betel nutes with her right toe while also reciting seven vows. Following, seven married women from the brideâs side (of the family) pass by the couple whispering blessings in the brideâs right ear. Once the wedding is over the bride is carried out by her brothers.

After she is carried out, the bride makes her way to the groomâs house where her new mother-in-law has placed a container filled with rice at the entryway of the home. The bride is expected to tip over the container with her right foot signifying wealth and her willingness to accept her new role and responsibilities as a married woman and wife.

Another festive tradition is a game known as Aeki Beki where a tray of water mixed with milk and sindoor (vermillion) containing coins and a ring gives guests the chance to âgo for the goldâ. The one who finds the ring four out of seven times will be the one who (supposedly) will rule the household. The day and the event is brought to an end with a pronunciation of prayers sent to God asking for love and happiness for the newlywed couple.
Â 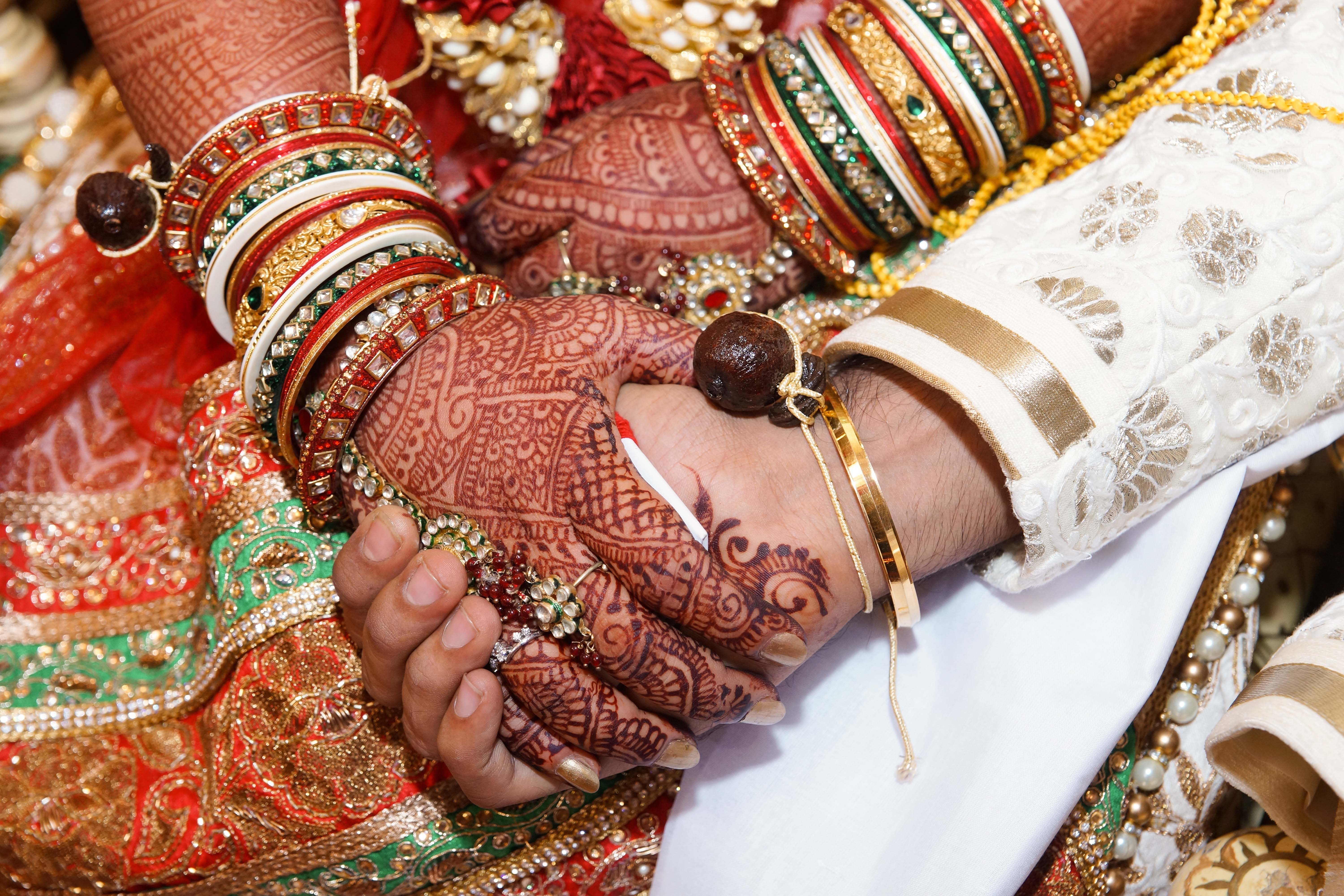