Armenian Festivities: The Art Of The Armenian Wedding

May 09, 2017 11:50 AM Back
The Armenian Culture is quite similar (in many respects) to that of the Middle East and the Mediterraneanâ¦and that includes many of the customs and traditions inherent to weddings.

Most Armenians are Christians heralding from an Ancestry rich in culture and steeped in tradition as they are part of one of THE OLDEST Christian churches: The Armenian Apostolic Church.

Weddings are elaborate affairs with significant celebrations commemorating the bond and the spiritual union.

Wedding celebrations typically begin the night before The Big Day when the groomâs family brings ornately wrapped gifts to the brideâs family. Among these a box containing the brides veil; one with her shoes; another with chocolate; one with Armenian cognac; perfume and flowers.

The brideâs parents prepare for the fete by adorning their home in elaborate elegance including a varied display of foods, desserts and family photos.

The brideâs brother is an integral part of her big day and is responsible for placing money (in her shoe) for good fortune, as well as placing her shoes on her feet. The brideâs âentourageâ (ladies only)Â  jot down their names on the sole of her shoeâ¦. And as each ties the knot, one by one their names get crossed off.

Prior to placing her veiled glory on her head, the bride circles it over the headâs over her single bridesmaids to bring them good fortune in love and marriage. Then, a happily married woman placed the veil on the brideâs head to bring HER good tidings as she prepares to tie the knot.

Toasts include well wishes including this most popular one: âmay you grow old on one pillowâ which is often engraved on invites, programs, favors and keepsakes.

Traditional wedding attire includes a red silk gown and a cardboard headpiece shaped like wings, covered in feathers. Typically, the god-parents (if they are happily married) serve as the witnesses for the bride and groom. Additionally, the god-father is expected to walk the bride down the aisle as well as to bring her the most expensive gift.Â  And, it is the god-parents (not the parents) that assume the responsibility for the couple.

Once the âI Dosâ are said, it is customary for the couple to walk through an arch comprised of elevated flowers held up by the wedding party. A pair of doves signifying love and happiness is released and guests shower the newlywed with coins and money.

Festive foods include hummus, dolmas, babaganoush, bourek or kabobs among others.
Â 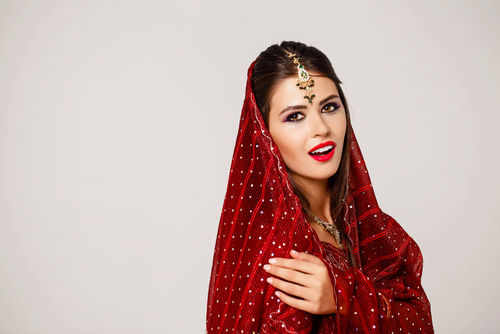